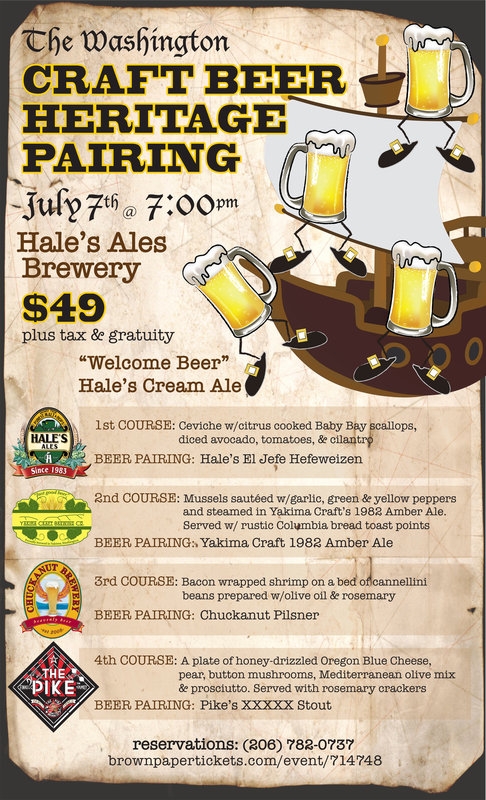 A gathering of Northwest craft brewery founding fathers
for an evening of dining, drinking and discourse.

Now the longest running independently owned brewery in the Northwest, Hale’s had some company in the early days, some 30 odd years ago.  Hale’s started in 1983, a year after Bert Grant opened Grant’s Brewing in Yakima where Chris Swedin worked as the master brewer. Soon, Charles and Rose Ann Finkel of Pike Brewing and Will & Mari Kemper of Thomas Kemper Brewing Co. opened their doors.  Thomas Kemper Brewing Co. gave rise to the famous soda we have all come to know and love.  The Kempers eventually closed their original business and, in 2008, opened Chuckanut Brewing in Bellingham, Washington.

On July 7th Hale’s will host the Washington Heritage Brewmasters’ Dinner where guests will enjoy a delicious four course small plate meal paired with select beers presented by the founders of these pioneering craft breweries.
“We all knew each other and shared the many challenges of making small batch brewing a success,” says brewery founder Mike Hale, “It’s a really special thing to be able to get together with these folks after all this time to look back and see how far it’s all come.”

The evening’s highlights include speaker Alan Moen, retired editor of the Northwest Brewing News who will be speaking about how he has seen the craft beer industry change over the several decades, as well as a rendition of an early Grant’s Brewing Co. Amber Ale called “1982 Amber Ale,” made and presented by Yakima Craft Brewery president Jeff Winn.