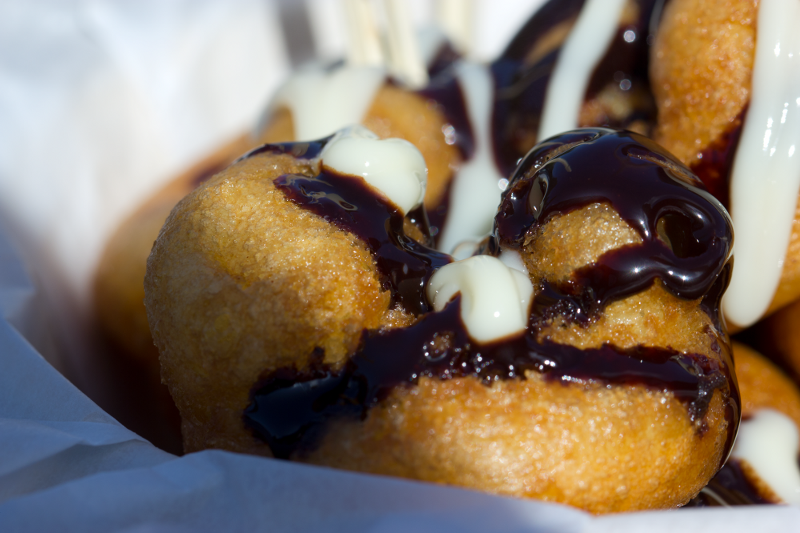 Eating it Up at the Mobile Food Rodeo

by Jessica Tupper
This year, I attended the Mobile Food Rodeo for the first time. It’s the event’s second year, and it’s filling a huge gap in the Seattle food scene. Seattle has a love-hate relationship with food trucks. We have a lot of them, and numbers are growing, but they’re scattered, and continually moving, or have short... Read More This year, I attended the Mobile Food Rodeo for the first time. It’s the event’s second year, and it’s filling a huge gap in the Seattle food scene.

Seattle has a love-hate relationship with food trucks. We have a lot of them, and numbers are growing, but they’re scattered, and continually moving, or have short hours. And it’s now often easier to get to the restaurant than the truck: Marination Station’s much easier to get to than Big Blue, and both have nunya sauce.

So the Mobile Food Rodeo is an amazing chance to try a ton of trucks in one spot, and debilitating illness was the only thing that was going to stop me from going. (I mean, I had a straw bowler hat to go with Jessie Portlock of Piranha Blonde’s cowboy hat. I keep things stylish.)

This year, we had 35 trucks to choose from, from Parfait to Snout & Co. I ate at four: Street Donuts, Off The Rez, Tokyo Dog, and Crisp Creperie.

Street Donuts was back from its winter hibernation, which was great. (I wasn’t the only person that was excited – there was a line right at opening.) I ordered the chocolate and vanilla donuts ($5), the vanilla pudding and chocolate sauce meshing with the hot, fluffy donuts. I love their japanese style toothpicks, which are perfect for spearing the fried goodies. They lasted seconds after they left the frying station. My love for fried food continued at Off The Rez, where I ordered a pulled pork frybread taco and a dessert frybread with blackberry jam. The taco was spot on – the frybread was a great vehicle for the pulled pork and tangy barbecue sauce, and I loved the crunchy, lightly vinegared slaw. The dessert frybread suffered from being a bit heavy, but that’s the risk with fried foods.

At Crisp Creperie, we ordered a seasonal, unholy marvel – a crepe with chocolate-bacon mousse, peanuts, bacon brittle, and bananas. I wanted more of the bacon flavor to shine through, which got a bit covered by the peanut/banana flavors, but it was still made of awesome.

While I was in line at Crisp Creperie, Chris grabbed a miso-mayo, seaweed topped dog at Tokyo Dog. The dog was spot on, but I’m not sure I’m ready for miso-seaweed dogs yet. Next time.

Getting a VIF (Very Important Foodie) pass was also a good idea, as the lines got ridiculously long after noon. And the VIF Uber discount was great for avoiding bus and parking chaos in Fremont. But I’d love to see some tweaks. More tables, room for lines, and I’d love to see a tasting option, like the Bite of Seattle $3 tastes, offered next time. Even with all that, the Mobile Food Rodeo is still a place to taste it all. See you in September!