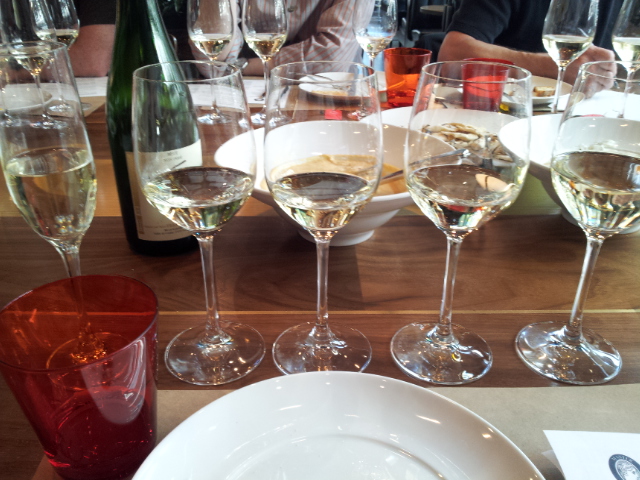 Challenge Your Wine Tastebuds with "Saturday with the Somms" at RN74

by Jessica Tupper
After my epic interview with Kim Mahar, this past weekend, I was thrilled to join sommelier Chris Tanghe at RN74’s Saturday with the Somms. When I arrived, RN74 was closed for the event. A few tour groups came and went, but we were pretty much left alone in our corner. About ten people and Tanghe... Read More After my epic interview with Kim Mahar, this past weekend, I was thrilled to join sommelier Chris Tanghe at RN74’s Saturday with the Somms.

When I arrived, RN74 was closed for the event. A few tour groups came and went, but we were pretty much left alone in our corner. About ten people and Tanghe were seated around a giant wood table, each with five wine glasses at their place setting. Four glasses were traditional wine glasses, and one was a thin stem filled with bubbly, a Vouvray, to wake up our senses for the tasting. The RN74 team had also placed in the center a spread of cured meats, cheeses, a delightful, but never actually identified, ricotta dip, hummus, crostini and pita chips.

As the theme was Riesling wines, Tanghe began with a discussion of German wines and wine growing practices, focusing on the Rhine district, or Rheingau. (He did cover other areas that produce Rieslings across the globe, but most of the discussion centered on the Rheingau.) It’s an interesting region and growing community, from the steep hills and terroir to the somewhat complicated label lexicon. As multiple vintners can share a single vineyard, it definitely matters to read the labels. He also briefly covered sugar content rankings from Kabinett to Eiswein (ice wine), but due to the lack of structure in these rankings, he advised it wasn’t the best way to guarantee you were getting the type of wine you wanted. After the group selected some bites from the table to nosh on, we started the first flight. Four samplings from the Rheingau to Willamette Valley were poured, with instructions on how to taste the wines. We even had a copy of the sommelier exam scorecard for practicing.

I basically learned that my palate would fail the sommelier exam. I can’t taste complexity at all, and I definitely can’t identify stone fruit. One that stood out was the Willamette wine – it was sweet, almost simply so, and one I’d want to pair with dark chocolate.

After round one, we were asked to decant our two least favorites and those glasses were refilled with two more wines.

I did leave more confident in understanding the Riesling lexicon, even if I still can’t distinguish flavor notes worth a dime. I’d love to go back once I try a few more Rieslings, and see if I can now notice the difference.

The next Saturday with the Somms is on August 11th, and covers the Bordeaux wine region. If there are any seats open, act fast – it will be a great experience.

Jessica Tupper
Jessica Tupper is busy, and likes it that way. As the Food Ninja, she likes to figure out new ways to explore the Seattle food scene - from eating at all the Tom Douglas restaurants in one day to epic sundaes using Bluebird and Molly Moon ice creams. Silly hats may or may not be involved. If you have an upcoming event, grand opening, great product, contact us
View All Posts by Author
So You Want to be a Chef? Welcome to the First-Ever Online Culinary School
Previous Post
A Memorable Dining Experience at Fleming's Prime Steakhouse and Wine Bar