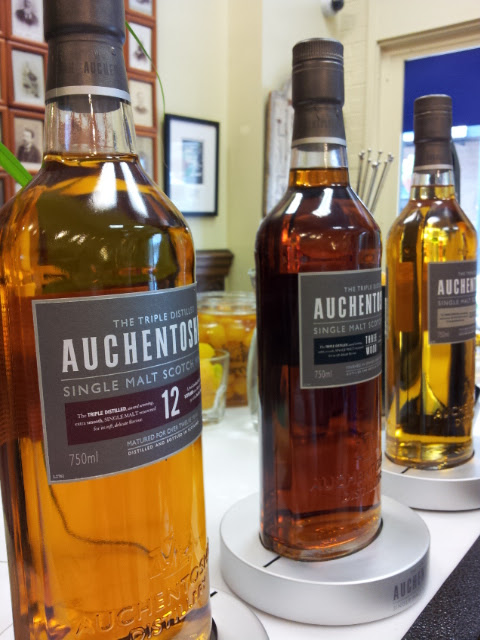 Auchentoshan Whisky & Whiskers Pop Up Barbershop At Tales Of The Cocktail During Tales of the Cocktail, I hopped a pedi-cab over to the Auchentoshan Whisky & Whiskers Pop Up Barbershop event at the Aiden Gill barbershop. (Heads up: the pedi-cab is a pretty fast way to get about town, but the roads make the trip a bit bouncy.)

When I walked into the barbershop I was met by a couple of smartly dressed men offering refreshments, who then pointed me to the bar where cocktails were being poured to order. Before I get to the important part – the whiskey – I have to comment that the Aiden Gill barbershop is so prim and proper it’s awesome. It’s a two-room shop, the first area a space for shaving tools and men’s accessories such as gorgeous ties, the second room the most traditional barbershop space I have ever seen. Had it not been an Auchentoshan event, with men in both suits and kilts, I would have expected a speakeasy or prohibition theme. Aiden Gill was in attendance, showing off just how cool bowties can be.

People were sitting in the back room, drinking cocktails, or receiving shaves or massages. The woman acting as the sole on-site mixologist looked like she was having a blast, pulling sprigs of lemongrass from a vase and talking about the ingredients. If more barbershops were like this, I think we’d see a national trend. I tried the Will-o’-the-Wisp, made with Auchentoshan Three Wood, lemongrass-infused earl grey tea, and pressed carbonated apple cider. Garnished with a blade of lemongrass and an apple slice, the apple/caramel and earthy tones were delightful. The ridiculously cute bemoustached mug helped, but only in that I wanted to take one home.

As I couldn’t exactly get a hot shave or a beard trim that would do me any good, I opted for a massage after a few sips of the will-o’-the-wisp. I had expected a hand massage based on the press released, but ended up getting a full back massage, with some arm work. It was not the most soothing massage, focusing on pressure, but it definitely helped get out some of my travel kinks. The masseuse said I was a mess of tension, but that may have been a hint to get a dram of whiskey.

Before getting on the ped-cab back to Hotel Monteleone, I was given a gift bag with a moustached mug for my collection, and a reminder to pronounce Auchentoshan “Aw-khen-tosh-an.” I hope we can do a review of their whiskies soon so I can work more with the brand’s range.